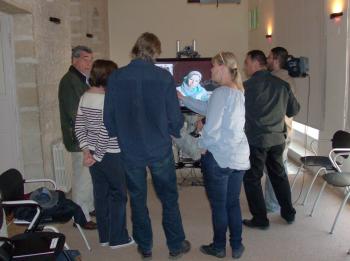 Storydoc is pleased to announce that deadline for apllications is extended to May 4th. Storydoc is a training programme with the focus on the development of documentary projects in two sessions: Corfu, Greece. July 11-15 and Athens late November. The Projects wanted should have a strong Mediterranean connection.  The call is open to filmmakers from the Region, other filmmakers with a project that deals with the area as . 20 projects will be selected, plus 5 from Greece and STORYDOC will offer 5 scholarships to the selected projects.

StoryDoc offers to its participants a new opportunity for further and deeper development of their projects and an additional chance to meet the international market.

This year at the first summer  Sheffield Doc/Fest in June (8-12),  StoryDoc will be coordinating a Greek and Mediterranean Delegation to Doc/Fest and you can be part of it! New deadline for application is February 28!

Even if you are not Greek but you have participated at 2005-2010 History Doc and StoryDoc workshops, you can be part of the delegation.

Filmmakers, broadcasters and sales agents were safe at the Goethe Institute in Athens, while riots were going on outside in the streets. While discussing upcoming projects in development, watching films, listening to clever and inspiring lectures or getting concrete information on the state of the art in terms of market, the demonstrations went on with burning of cars, smashing of windows and pavements. One or two of the filmmakers sneaked out to film a bit with their mobile phones or take some photos... and inside, during all three days of the seminar, the question was raised again and again: who can make a creative documentary on what is going on in Greece these years? The crisis, the demonstrations, why, who, what, where will it go?

The StoryDoc initiative is a sequel to HistoryDoc, founded by, and run by Kostas Spiropoulos, former general manager of the Greek public broadcaster ERT, a man with a vision, and with a strong energy and will to push the development of documentary in Greece – and abroad.

STORYDOC 2010 will take place in Athens December 4-7, 2010, at the Goethe Institute. Four months after the first session in Corfu, the participants  had the chance to further develop their film project, conduct additional research, improve their trailer while some participants  have already started  production. Other participant filmmakers and producers presented their projects in pitching sessions around Europe such as DOCUMENTARY CAMPUS, ITFA and Sheffield.

STORYDOC SEMINAR 2010 fIrst part copleted with success. ( On Wednesday July 7th in the campus of the Ionian University in Corfu, Greece  the international documentary workshop “StoryDoc 2010”  successfully concluded  its activities. Organizers of the workshop were the Greek educational non profit institution StoryDoc ,(www.storydoc.gr) the Ionian University, Audiovisual Arts Department and Greek Public Television E.R.T., in collaboration with the Region of Ionian Islands, the Municipality of Athens, the French Institute, the British Council, and the Goethe Institute. The seminar was supported and funded by the Media Program of European Commission. (Watch the video https://www.youtube.com/watch?v=OavAEuqajnA.

On Wednesday July 7th in the campus of the Ionian University in Corfu, Greece in a warm, friendly and productive atmosphere the international documentary workshop “StoryDoc 2010” concluded with success its activities. Organizers of the workshop were the Greek educational non profit institution StoryDoc ,(www.storydoc.gr) the Ionian University, Audiovisual Arts Department and Greek Public Television E.R.T., in coloboration with the Region of Ionian Islands, the Municipality of Athens, the French institute, the British Council, and the Goethe Institute. The seminar is supported and funded by the Media Program of European Commission.
Watch the video https://www.youtube.com/watch?v=OavAEuqajnA

A mysterious collector of works of art, of Greek origin, who created the largest hidden collection of modern art in Moscow in the history of the Soviet Union, the Kostakis Collection, met in Corfu an Egyptian painter, Abdalla. The painter, much earlier, had attempted to show with his life and his work that the two worlds, the Christian and the Muslim, share the same principles. The collector explained to him that the other two worlds, the Eastern and the Western share, lately, the same value: money.

Storydoc is an EU supported training programme ”for filmmakers with Mediterranean projects”. The first 2010 session took place July 5-7 in Corfu, where these words are being written the day after a workshop that was full of heat outside and inside AND of passionate filmmakers with film projects at different stages of development. From the following countries: Greece, Germany, Romania, Scotland, Italy, France, Croatia, England, Latvia, Bulgaria, Palestine and Israel. 24 projects were worked upon with tutors (generalists, commissioning editors, directors, editors, distributors and producers) from Denmark, Greece, Israel, Palestine, France, Germany, Scotland, England, Finland and USA.

In Corfu, with the workshop of STORYDOC a network was born.In this network participate the tutors of the first session, the participants filmakers from all the regions, the observers of the workshop, the professors and students of Ionian University and the storydoc members. By the 19th of July storydoc is  launching separate blogs for each project which has been developed in the seminar in Corfu. Through the blogs  the tutoring will be continued plus the dialogue for the projects. Clheck below to find  the list of  emails of the network members.