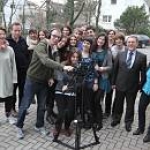 UNKNOWN LIFE
A documentary-film-workshop by German and Greek youths.

Twelve youths from Germany and Greece work together on shooting documentaries in both countries. The unknown life, the own life become the topic of their cinematic work. Τhe twelve youths are developing and producing  six short documentaries in a film-workshop directed by the filmmakers Vera Scoepfer and Dieter Bongatz and  co-directed by the producer Kostas Spiropoulos. The creative network Screenagers in Germany and the Educational Institute StoryDoc in Greece are the educational associates in the project. Organizers and supporters are the  Goethe Institute Athens  and  krea-Jugengcafe in Bergische Gladbach.
Read more...

Deep in rural California, in a forgotten holiday oasis on a salt-laden sea, lives the Parrish family. While the parents are trying to stay on the right side of social services and the law, their youngest son Benny plays in a surreal Ritalin-infused dreamworld

If you’re going to try and do something about the spiraling epidemic of violence on the streets of Chicago, you better know what you’re talking about. “The Interrupters” do - all former gang members, when they gather as a group they bring 500 years of prison time to the table.

The Downfall of Mubarak

The first documentraries in the Egyptian revolution were screened in Cairo Documentary Festival organized by The American University in Cairo (21-28 March 2011)
Intifadat Intifadat, a collective of filmmakers, won the Streaming the Revolution Award for three videos they submitted. These videos showed an incredible sensitivity with the camera. More than merely scenes of protest, the videos convey a sense of raw emotion.
Read more... 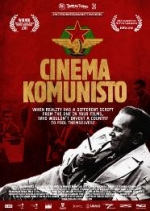 Directed by Mila TurajlicFor 32 years, Leka Konstantinovic was the personal film projectionist for Yugoslavian President and noted film enthusiast Josip Broz Tito. Tito's cinephilia is legendary, and includes such startling but charming anecdotes as his order to blow up a functioning bridge to achieve a more accurate shot for a film,

Director:Scott Rettberg,Producer(s):
Scott Rettberg, Megan Sleeper, Jeffrey Stewar,Editor:Bryan S. Norfol On September 11, 2001, New Yorkers witnessed their fellow Americans' inspirational potential for generosity and sacrifice as aid from across the nation flowed into the city. Two years later, in 2003, five-year-old Evan Parness learned of a devastating firestorm ravaging the landscape and residents of California.

Documentary,World Premiere,Directed by: Dana Nachman and Don Hardy,Love Hate Love.
Thousands of lives were shattered by three separate acts of terrorism: the attacks on the World Trade Center, the London bus bombing and the Sari Club bombing in Bali. This inspirational documentary tracks the difficult journeys of three families torn apart by these events as they struggle to pick up the pieces, create lasting legacies for loved ones lost, and ensure love triumphs over hatred.

What happens when Athenians take upon making their city a better place to live. Every Friday by ET1 a documentary series Eco Diaries

A documentary series about the Greek War for Independence against the Ottoman Empire in 1821 and the creation of the modern Greek state. The first alternative naration of the revolution, produced for SKAITV by ANEMON PRODUCTION