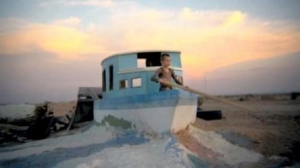 Deep in rural California, in a forgotten holiday oasis on a salt-laden sea, lives the Parrish family. While the parents are trying to stay on the right side of social services and the law, their youngest son Benny plays in a surreal Ritalin-infused dreamworld. Meanwhile CeeJay has moved to the area from the ganglands of LA where his cousin was just murdered. He’s now hoping to become the football star that wins the girl. On the wrong side of 90, Red refuses to give up his dancing shoes, living on his memories and a steady stream of whiskey and cigarettes. Music video maestro Alma Har’el discovered Bombay Beach while scouting locations for a Zach Condon (Beirut) music video. Using improvised dialogue and dreamlike choreographed dance sequences, and music by Condon and Bob Dylan, she delivers up a vividly original feature doc debut.