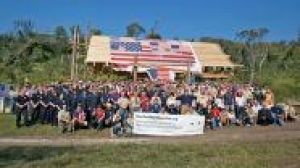 On September 11, 2001, New Yorkers witnessed their fellow Americans' inspirational potential for generosity and sacrifice as aid from across the nation flowed into the city. Two years later, in 2003, five-year-old Evan Parness learned of a devastating firestorm ravaging the landscape and residents of California. He expressed a wish to help the affected children, and from that innocent gesture a movement was born. Since that first truck set out for California filled with toys and relief supplies, the New York Says Thank You Foundation has brought New York firefighters and volunteers to Illinois, Louisiana, Indiana, Texas, and Kansas in the wake of natural and man-made disasters to repay a nation that came to New York's aid in a time of need.

Scott Rettberg's documentary follows the participants of this landmark public service initiative as they commemorate the anniversary of 9/11 each year by rebuilding homes, hospitals, schools, and churches destroyed by disaster. In the process they share stories of survival and hope, and bring a patriotic message of gratitude and solidarity to survivors of tragedy nationwide.