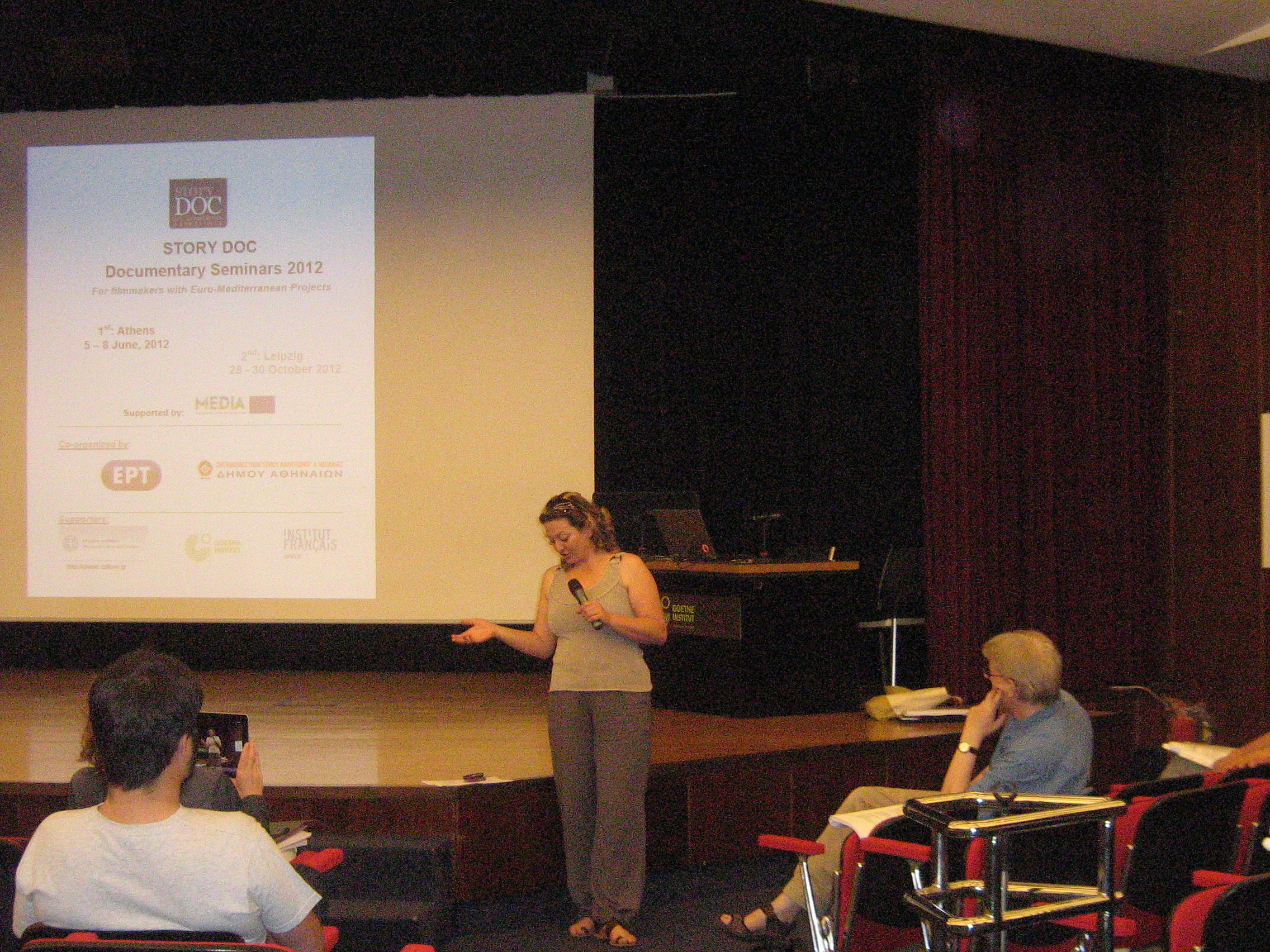 Filmmakers At Times Of Political Change
BY Diana El Jeiroudi

- Introduction
DOX BOX as Documentary Film festival was the meeting points for filmmakers in Syria.
Filmmakers and audiences were inspired by screening of films such as BURMA VJ in DOX BOX and the debate around the "filmmaking" of the film itself.
When the revolution started, documentary became a tool and a form for activists work.
I am mostly interested in the challenges facing "filmmakers" but also "filmmaking", beyond the reality of Syria, to the whole world.

- The current situation in Syria & screening of a short doc.
A lot of debate was and still is going on on whether we are filmmakers as artists or eyewitnesses, reporters, and activists.
The direct & immediate challenges for filmmakers that they were shocked by the revolution.  It was not only because they were afraid, it was also because things got mixed up.  In order to make a film, you need to have a plan for its structure, a focus..   At time of political, radical political change, everything is very fast and very vague.
Video-activists, being activist, had the initiative of documenting of the atrocities.  It was part of their self-expression as citizens, active citizens.

Filmmakers, were elitists, they had lots and lots of ethical questions; should we treat "participants" in the films as "masses", "background" and "subjects", or respect the fact that they are characters and they need to develop and not be at risk because of our making of these films.

Some filmmakers went and started filming. There they realized the possibility of being both filmmakers and active citizens without confusing both.  They started doing "workshop" where they trained activists on the tools to film, edit, and build and deliver better reports and clips.  It changed a lot what the revolution and activist-groups are developing and sharing with the world.

By that time, few films have been released (finished), some went on pan-arab television channels.
This is a short doc which was released by beginning of 2012, shot in August 2011.

- Audience, Media and a New Genre .
After the film, I need to stress to whom these films were addressed.  Mainly to the local & regional audiences, both loyalists and of the opposition.  Because people in Syria were abandoned by the world, they are no more interested in addressing it.  Unconsciously, these films are mainly made with the local and regional audience in mind and at heart.    So if the international community of broadcasters and screens are interested in catering for their audiences, the answer cannot be by sending their own filmmakers to "recruit" locals and it is not by trying to "investigate" the complicated truth.  It is by bringing organic voices from inside.  It is not by creating a multi-web doc where several contribute, because it is just a form, a media.  It is by real organic and not informed collaboration.

The collaboration between activists & filmmakers created a more enriched and new filmmaking.  It is very important to understand that this became a generalized new technique and process.  It will change the filmmaking "process" but also "genre" or create a new one.

I conclude this by showing you a short doc, created by two filmmakers, one who died under fire in Homs, while the second was his "student" video activist.  It is a 4 minute doc that the second made in TRIBUTE to his mentor.

End
back to top