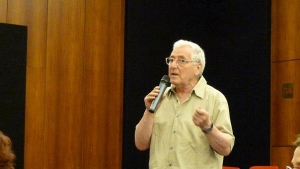 Film making is an organic process. In a certain way the finished film is already there in the first spark of the idea of the film to be, often years before the work is actually completed.

But in the same time this process can divided in three clearly defined stages: imagining/shooting/editing. The main thread of my lecture is to look at the complex relationship between these three different moments. My point of view is not theoretical, but solely based on my experience as a director (and a former editor). It’s not “dogma”, just a way to share with other directors some of my personal convictions about the beauties of our common craft.

For me a film starts always like a dream. It’s a point I always need to stress as a documentarist: film is form.

When we say that we are filming reality, it doesn’t mean that we just run behind the situations like clumsy butterfly catchers. We must create the film beforehand in our head, we must (to go on with the same simplistic metaphor) create our own net, a specific filmic form which will enable us to put the reality in a new perspective, so that the viewers can discover the most banal things as if they have never seen them before (which for me is the real point of filmmaking). So for me imagining doesn’t mean daydreaming and looking at the clouds passing by. It is an almost technical inner process during which the director finds the uniqueness of his approach and point of view.

Films, not just ideas or figments of imagination, but real objects, made in real time and space. There are not mere “intentions”, but physical realisations of the director’s intentions.

The shooting is this moment when the dreams and desires collide with hard facts. It is mainly a question of balance. You must have a firm stand, a strong point of view now translated in terms of matter of fact choices (what do you film, when, where, where will the camera stand and for how long and so on). That is the job : taking decisions, directing, not let the camera fall where it may, while crossing the fingers and hoping something interesting will be caught by chance, or , as we see very often in written projects, “following” a situation or a character as if they some shepherds, and you some sheep.

But on the other hand, you must be very careful not to let your directorial presence destroy the reality of the situation. It happens quite often that we imagine a complex shot, so difficult to adjust technically that by the tenth take all the life of the situation is gone and lost. There are no rules which could help to avoid it, except to be all the time very alert to the dynamics of the situation as it happens in front of you, to “feel” if you are not taking too much control (which is as bad as loosing it). And always be ready to step back, because in the end the point of the film is not to show me or you as a director, but to tell the story we want and need to tell.

As a former editor (and editing still my own films) I feel quite free to say that when the film is shot, everything is done. What remains, the editing process, will never “create” the film. You create the film when shoot it. You can loose your film in the editing room, but you cannot find it there, you can only understand better what you have done and make it clearer for the viewers. Too many documentary directors still think that they can shoot everything that happens in front of the camera, and that the film will be created afterwards in the editing room. For me this kind of post production directing is just a make believe. It makes strange objects, looking like films but devoid of any real substance and filmic energy – which only the shooting process can create.

I insist on that not to overplay the importance of editing, which is anyway immense. The way I see it to day, editing is mostly a very complex way of “reading” and organising the material that has been previously created, in order to make it visible for others.

The French writer Valéry said once: “take out everything so that I may see something”. ("Otez tout que j’y voie").

The point of editing is simply to take out everything that hides what you want to show and tell. So then we can speak about construction, cuts, rhythm, tempo, pace and so on, but it really means only that: free your film from everything that distracts the spectator from the point you want to make (and which is very often the director’s own desire to show off, or to hide some blunder he thinks he has made. I know it sound a bit abstract but it is my experience with my own work that the film suddenly starts to live a life of his own when you take out the shot or the scene you love the most).

Editing is a long and sometimes painful process – the moment we must acknowledge the reality and also the limits of what we have done. Often we get lost in mazes of our own creation: everything seems false, falling apart, boring and we don’t understand how we get ourselves in such a mess. When this happens to me (always at some point of all my films), I go back to he most simple questions: what was at the beginning the thing I wanted to show, the story I wanted to tell? And why the film at this stage is unable to show and tell it.

PS: all that may seem a bit abstract, but believe me, it’s not, not at all.
back to top