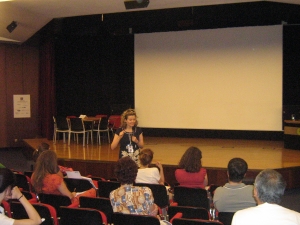 The term inspirational talk- is quite daunting.

The very word inspire is dubious- suggesting that a visitation from the muses is all we need to make work which will travel and do well internationally. We all know this is not the case.

I suspect inspiration is not a word I have ever fully trusted- maybe it’s because I’m too Scottish.

I heard a wonderful quote from the American artist ….where he said” Inspiration is for amateurs- I just go to work”.

So maybe what I am proposing in this talk is not inspiring at all- but just some shared hints and clues to keep us working. Which sometimes seems more important than anything.

Seminal film which has influenced so many filmmakers.

CLUE: be yourself. Be honest.

It is HUMAN BEINGS we want to see in films- your job is to liberate the human, unofficial story…

2 DREAMS OF A LIFE by Carol Morley

Film about a woman called Joyce Vincent – a young seemingly happy and popular woman whose body was found in a flat 3 years after she died- surrounded by Christmas presents.

CLUE: trust your obsession- it is not the story in itself which is of interest but your relationship with it. This is what commissioning editors and funders want to see.

Filmmaker’s sustained obsession is what makes it- not very original but her intrigue becomes ours.

How will you make the story universal?

Withholds picture of her…

Don’t hide yourself as a filmmaker. Your unique perspective is what will make the film and this is what needs to emerge.

Film becomes about the journey to find out who this of it woman was – and how impossible it is to know another person. The poetic truth is what caries it.

see where whole story of a society can be

told-
working of Sharia Law told through divorce court
looked not for exotic but for commonalties- problems of marriages; the pain of the breakdowns
we become intrigued through stories which are familiar yet different

0-9.03
directed about loss of her own father, Kawase stretched language of film to try to express rawness of journey to look for past.- play- find own language for emotions

CLUE DON’T BE AFRAID TO EXPERIMENT- MAKE IT YOURS

CLUE: Control information = let the story become bigger- allow us to emote if you hold back .Even when injustice burns- info can be controlled to create greater impact.

1. 6Georgi and the Butterflies by Andrew Paounov 2004

Story of a heroic doctor trying to find way of keeping home going. The producer Mrtichka Bodzhilova has an incredible knack for making local stories work on the international scene .

CLUE: look for layers- not just story of poverty, of lack of funding- but of courage, of humour, of everything the different spoons symbolise.

CLUE: GO CINEMATIC
back to top