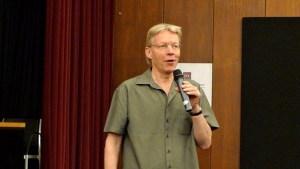 This lecture was almost entirely visual with very little comments and not based on a script, so the following is a brief on the different inspirational trailers screened-

Trailers should be as different and the films and therefore I’d like to show you some different trailers that reflects the same variety as the variety in finished films.

The first one is acually not at trailer but the opening of a film but it could be a trailer, showing through the strong viewpoint of the director that one scene can tell it all:

The inspirtion for directors often come from a place. But a place is not development, does not develop in time, so here are some examples of how directors have made different choices with the same starting point.

In the first example the conflict between different inhabitants in a villgage is the focus.


The second example is only visual and audial, no attempt to predict development or action, it’s the directors vision. Impossible to pitch, needs visual material.

Very often it’s neither the story, the characters or the visual that is of interests – it’s the director. Here is an examples where the written presentation left me totally confused but when I saw this very personal trailer, it was all clear what the film would be about.

Here is an example of directors who set out to make a film about outragess killings of innocent people – a story very often told – but ended up with a portrait of the killers, who proudly tells there story before the camera.

When you have shot very little and it’s imposible to predict what will happen, how do you then present a story. You show the inevitable story. Characters with a conflict that they need to react to. We don’t know what will happen but that something is bound to happen.

The Believers – by Ole Bendtzen, Denmark
back to top